PREPOSITION AT, IN, ON.

The car was parked at the corner of the street.
There's a telephone box on the corner

She put the chair in the corner of the room


When i was in Spain, it was terribly cold
A thousand homes in the east of Scotland suffered power cuts.


I've been teaching at the college in London.


They were sitting having dinner in the restaurant .

You also 'in' with containers of any kind when talking about things inside them.

She kept the cards in a little box.

5. When talking about addresses , you use 'at' when you give the house number, and 'in' when you just give the name of the street.
They use to live at 5, Weston Road.
She got a job in Oxford Street.

Note that American English uses 'on' : He live on Penn Street.'
You use 'at' when you are talking about someone's house.

I'll see you at Fred house.

6. You use 'on' when you are talking about a place as a surface. You can also use 'on top of'.

I sat down on the sofa
She  put her keys on top of the television.

You also use 'on' when you are thinking of  a place as a point on a line, such as a road. a railway line, a river, or a coastline.

Scrabster is on the north coast
Oxford is on the A34 between Birmingham and London.

PREPOSITIONS OF PLACE- AT, IN, ON


1. You use 'at' when you are thinking of place as point in space

She waited at the bus stop for over twenty minutes.
Where were you last night ?' - 'At Mick's house. '

Mrs Castle was waiting at the bottom of the stairs.
They escaped by the window at the back of the house.
I saw a taxi at the end of the street.

You use 'at' with public places and institutions. Note that you also say 'at home' and  'at work'.

I have to be at the station by ten o'clock.
We landed at the small airport.
A friend of mine is at Training College .
She wanted to stay at home

PERBEDAAN ANTARA DESPITE / IN SPITE OF DAN ALTHOUGH / EVEN THOUGH

Despite / in spite of + nomina
Although / even though / though + clausa

Recount is a text which retells events or experiences in the past. Its purpose is either to inform or to entertain the audience. There is no complication among the participants and that differentiates from narrative
1. Orientation: Introducing the participants, place and time
2. Events: Describing series of event that happened in the past
3. Reorientation: It is optional. Stating personal comment of the writer to the story
• Introducing personal participant; I, my group, etc
• Using chronological connection; then, first, etc
• Using linking verb; was, were, saw, heard, etc
• Using action verb; look, go, change, etc
• Using simple past tense

Example of Recount text
Mr. Richard’s family was on vacation. They are Mr. and Mrs. Richard with two sons. They went to London. They saw their travel agent and booked their tickets. They went to the British Embassy to get visas to enter Britain. They had booked fourteen days tour. This includes travel and accommodation. They also included tours around London
They boarded a large Boeing flight. The flight was nearly fourteen hours. On the plane the cabin crews were very friendly. They gave them news paper and magazine to read. They gave them food and drink. There was a film for their entertainment. They had a very pleasant flight. They slept part of the way.
On arrival at Heathrow Airport, they had to go to Customs and Immigration. The officers were pleasant. They checked the document carefully but their manners were very polite. Mr. Richard and his family collected their bags and went to London Welcome Desk. They arranged the transfer to a hotel.
The hotel was a well-known four-star hotel. The room had perfect view of the park. The room had its own bathroom and toilet. Instead of keys for the room, they inserted a key-card to open the door. On the third floor, there was a restaurant serving Asian and European food. They had variety of food.
The two week in London went by fast. At the end of the 14-day, they were quite tired but they felt very happy.
untuk mengerjakan soal silahkan klik link disini
Diposting oleh Unknown di 18.06 Tidak ada komentar: 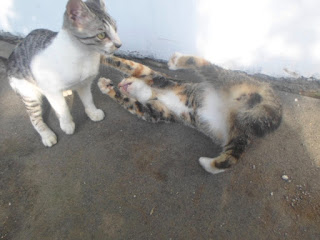